Natural ecosystems are often incredibly sensitive to change, such as the introduction or removal of a species. A healthy ecosystem is said to be in equilibrium, which is a relatively stable state that keeps population sizes within a sustainable range (not too many of a certain species alive or dead). Consider the case of bears (who only eat fish) and salmon (who are only hunted by bears): 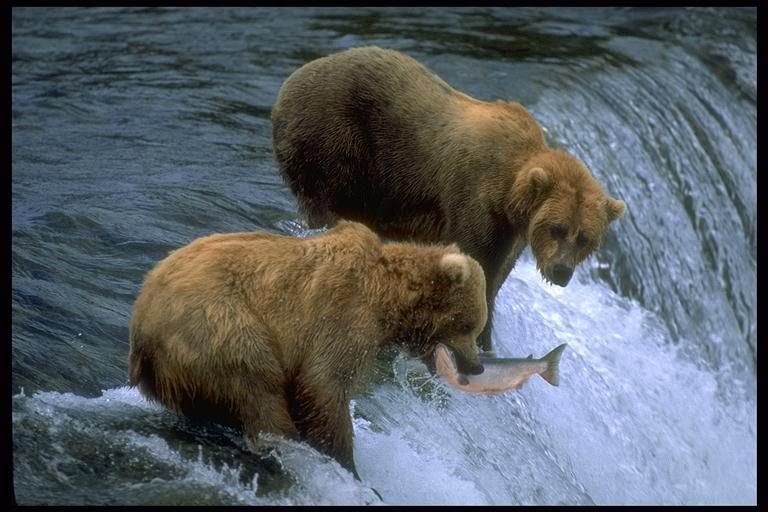 In a perfectly stable ecosystem, this cycle can continue indefinitely. Of course, natural ecosystems are far more complex than this simple example, but the relationship between species applies to complex ecosystems as well.

Because of all of the interdependence between various species, it can be very difficult to understand the implications of small changes to an ecosystem in the real world because (a) the relationships between species can be incredibly complex and (b) actual experimentation in real-world ecosystems can be catastrophic -- by the time observable changes have taken place, it's often too late to stop their effects.

Simulations allow scientists and others to determine whether a particular action (such as introducing a non-native species into a habitat) will have unseen effects on a system. Today you will use a simple simulator in Scratch to observe some virtual ecosystems.

The project we start with today will perform a very simple simulation of a bay (or whatever your favorite shark-infested body of water is) containing sharks and fish. The simulator breaks the ecosystem down into a set of regions in a grid, with each region containing either sharks, fish, or open water. As time goes by, each species behaves by the rules of their population model, which define things like reproduction rates, natural predators, and so on. Sharks have a different set of rules than fish, and each one is adapted for surviving in a different way.

The goals for today's lab include:

A population model is just a fancy term for a list of rules that determines how a particular population behaves. The current simulation has two different populations present in it: sharks and fish.

Now that you've seen the models, let's change them all around! We'll change some of the rules in the model so that the populations behave differently.

This simulator was built to be customized, and that is your job today! Your objective is to add a new species to the simulator that will be able to coexist with its neighbor for 25 time steps. Do not change any of the pre-existing population models, but feel free to do whatever you want with yours. There are three steps to creating a new species:
When you finish customizing your own species, run the simulator through 25 time steps and save the project. Remember: all three species should survive to the 25th time step.