This is part A of the image mosaicing project, primarily focused on stitching different photos taken the same location into a seamless mosaic. We choose a base image and warp the others to the same plane as the base image, via appropriate homographies computed from human labeled keypoints. Part B of the project will automate keypoint labeling via feature detectors and feature descriptors.

The following are photos of my room that I will be stitching, with the middle as the base image: 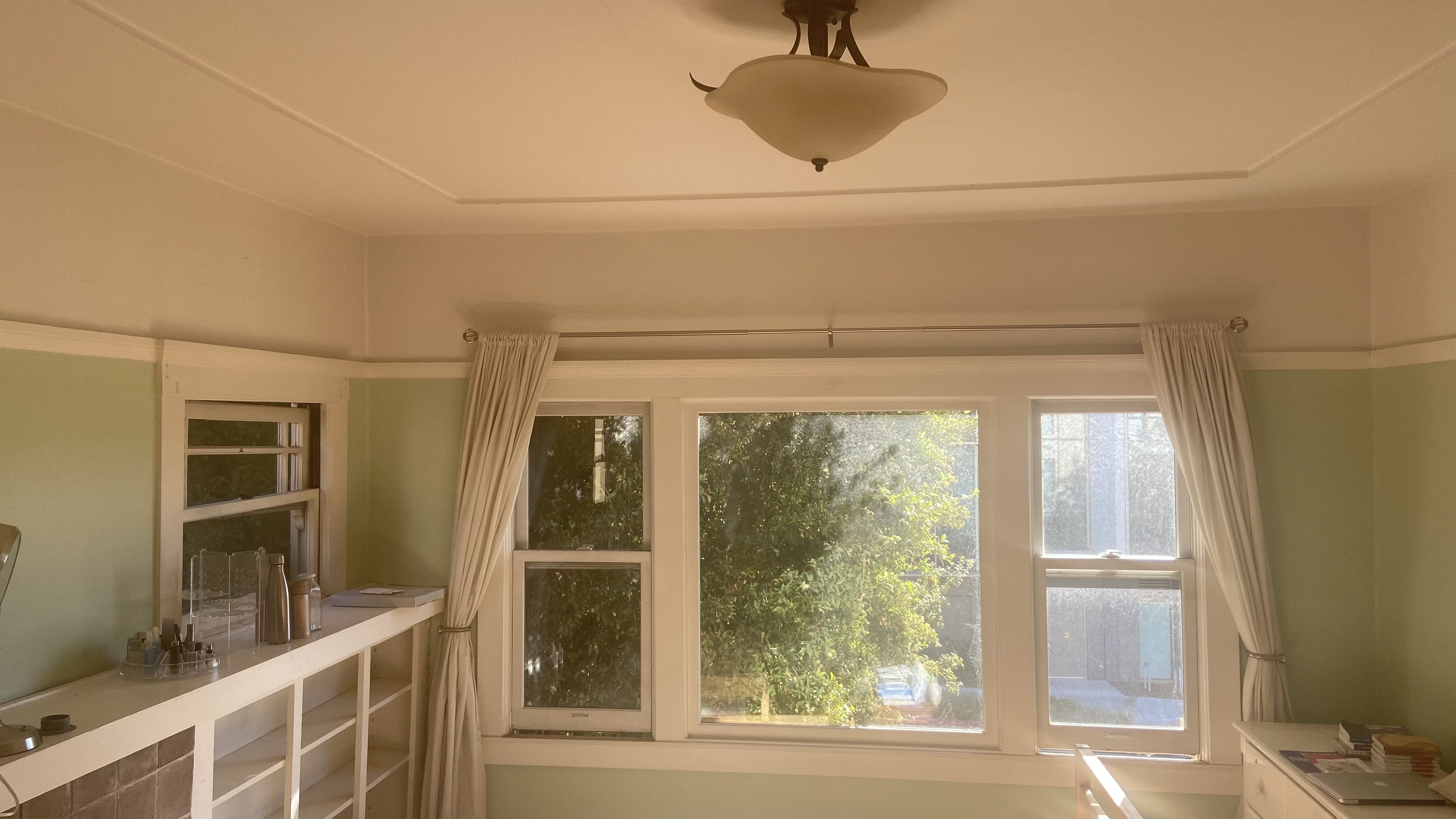 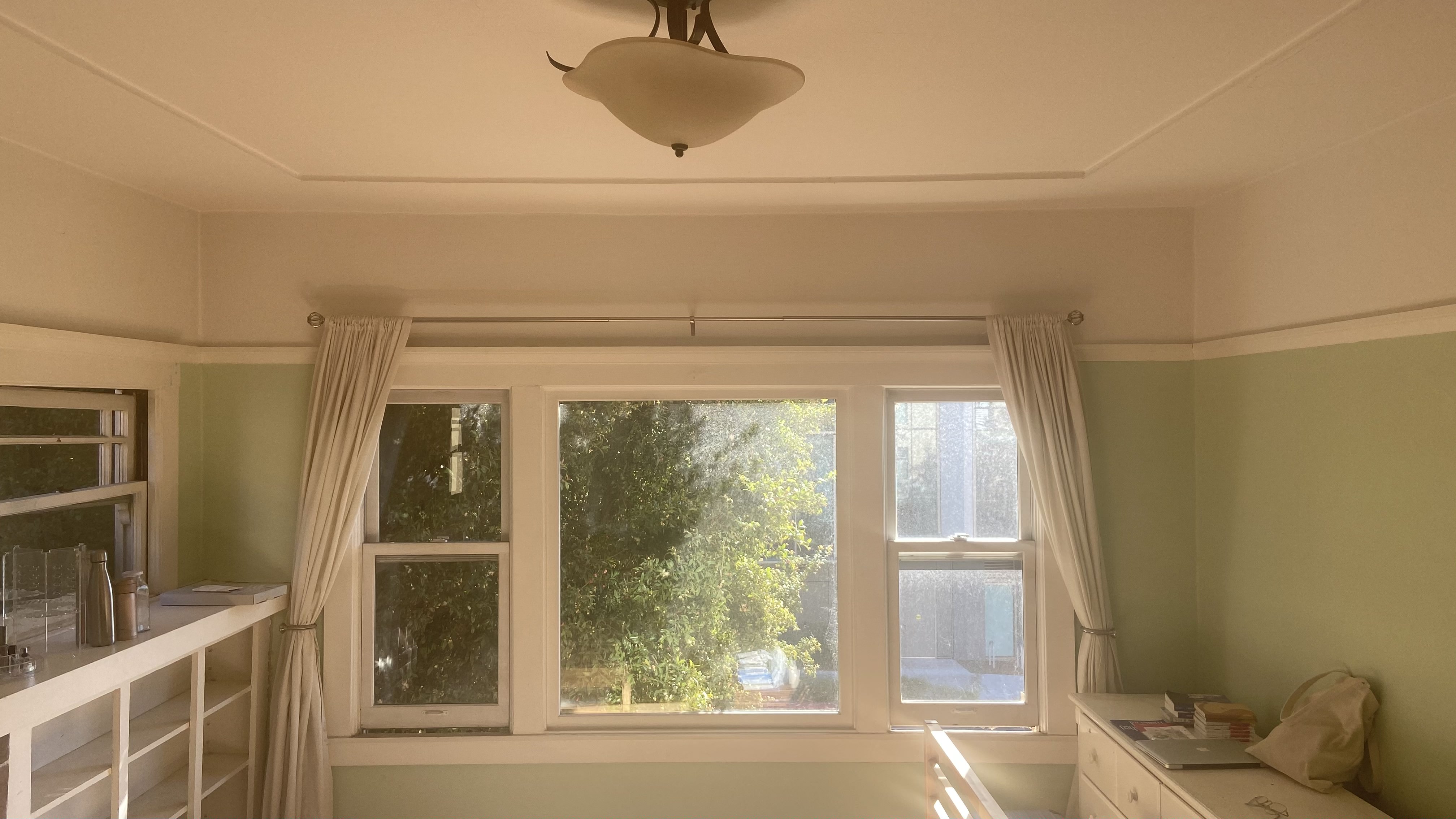 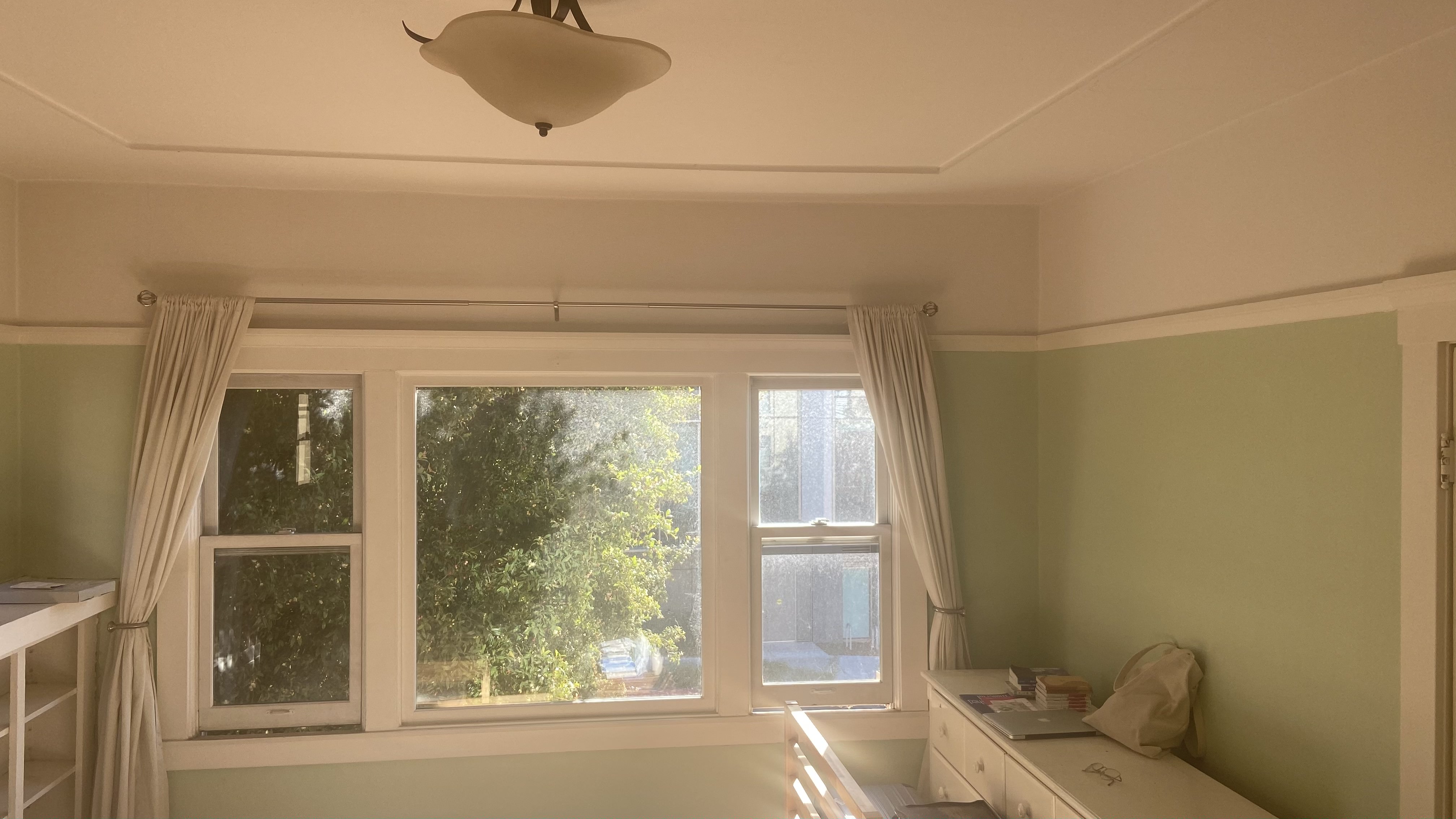 Taken with an iPhone 11 without adjusting any fancy settings because I have no camera 😭.

We compute the homographies by least squares on a set of keypoints. Keypoints: 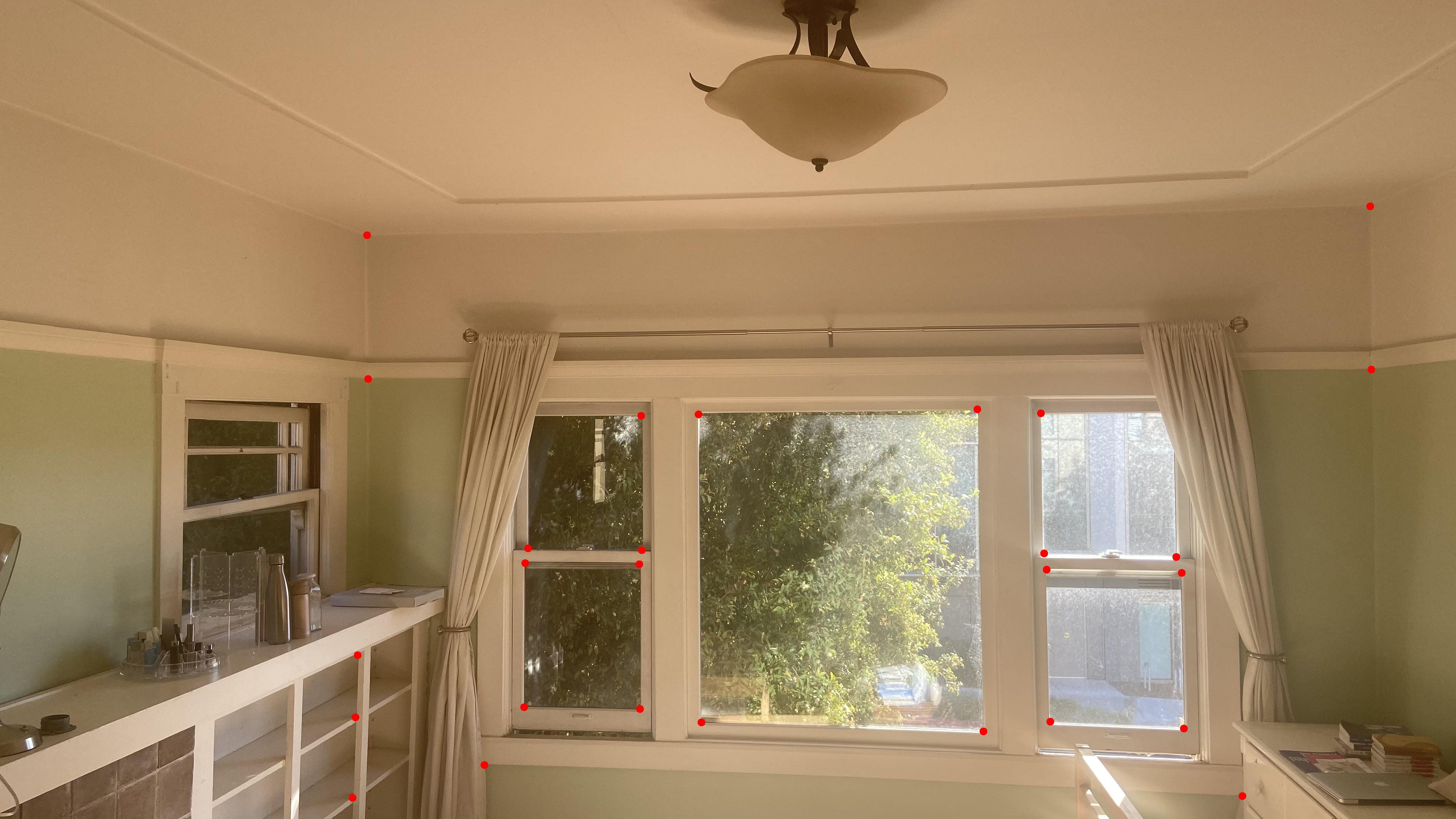 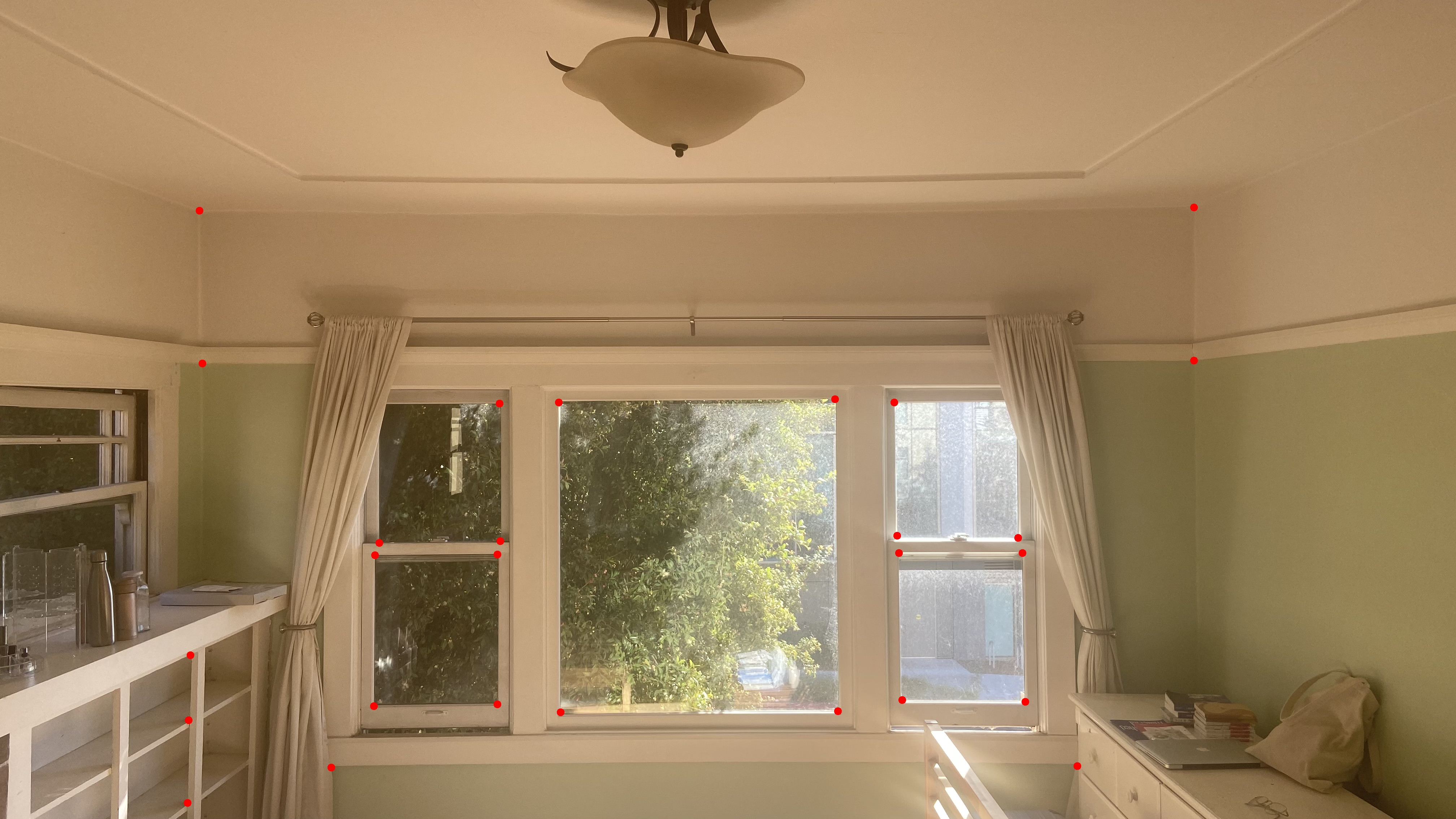 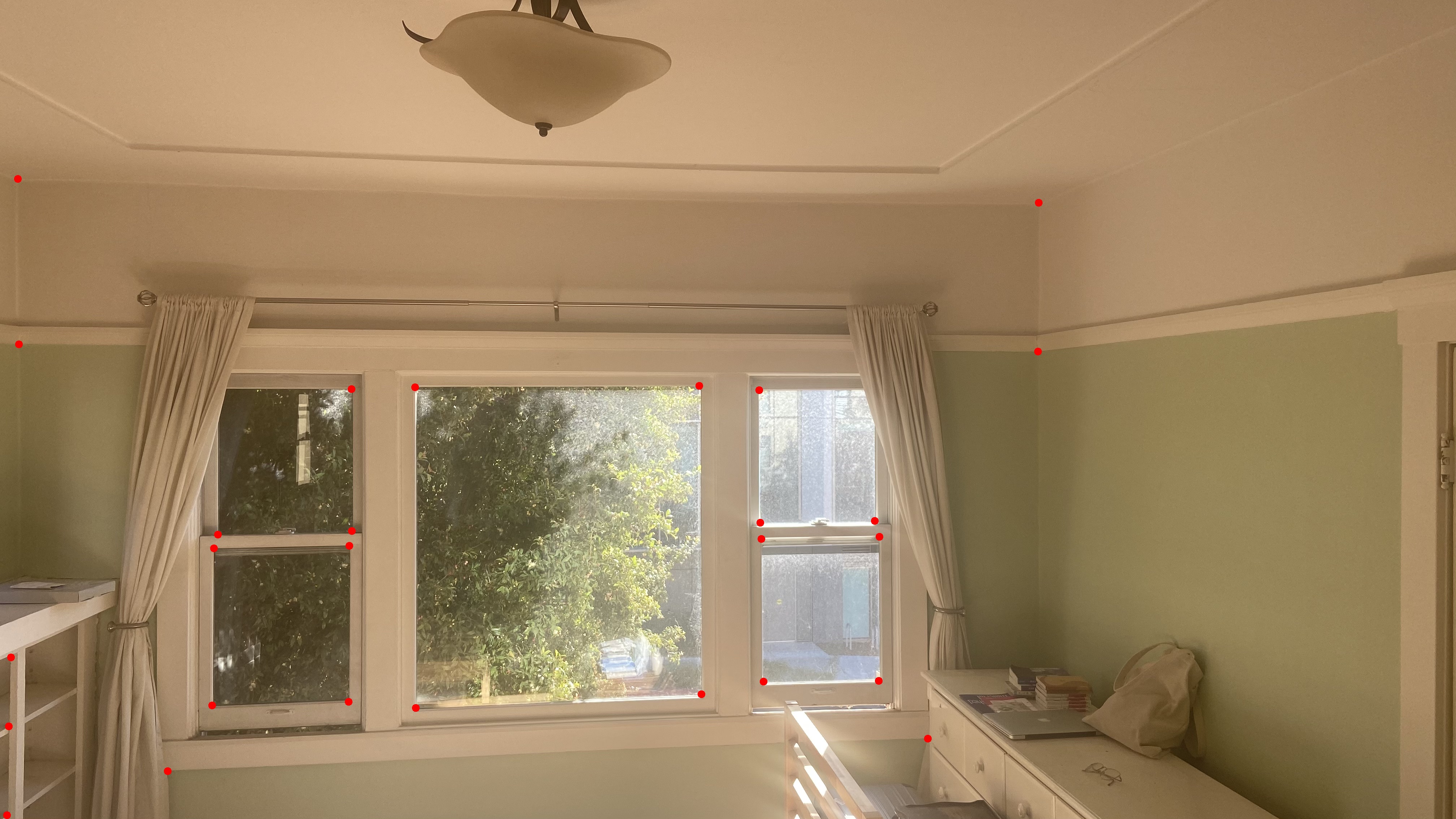 Some tricks to selecting good keypoints include

From the keypoints, we solve for the homography:

We want to perform least squares on the homography matrix, so we need to rewrite the equations. Taking advantage of gx + hy + 1 = 1, we can derive: 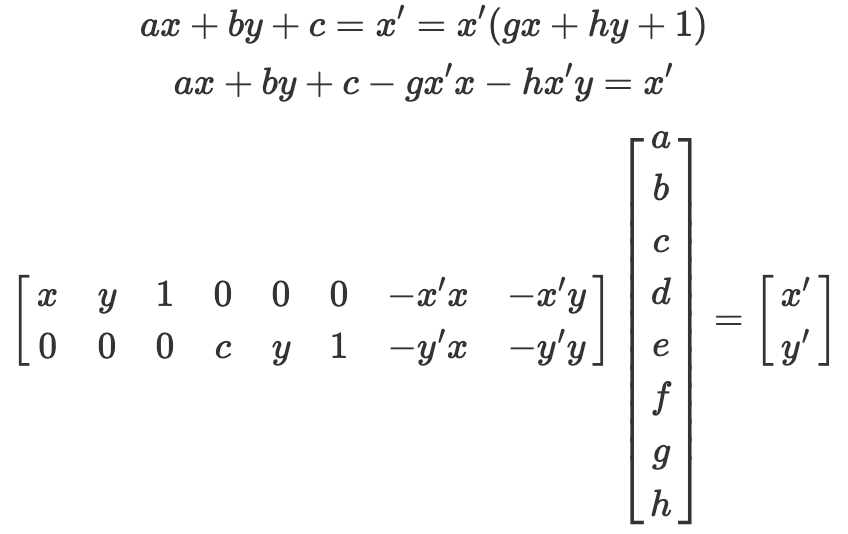 which is now in the form we can solve with least squares.

With the homographies computed, we simply need to warp the pixels with the transformation. In general, we want to first define the pixel positions in our target image and interpolate the inverse warped pixels. Since homography preserves the convexity of our image, we can forward warp the corners (i.e. rectangle) to our target image (now a convex polygon), then define the pixels within the polygon as our target and inverse warp. Results of rectifying: 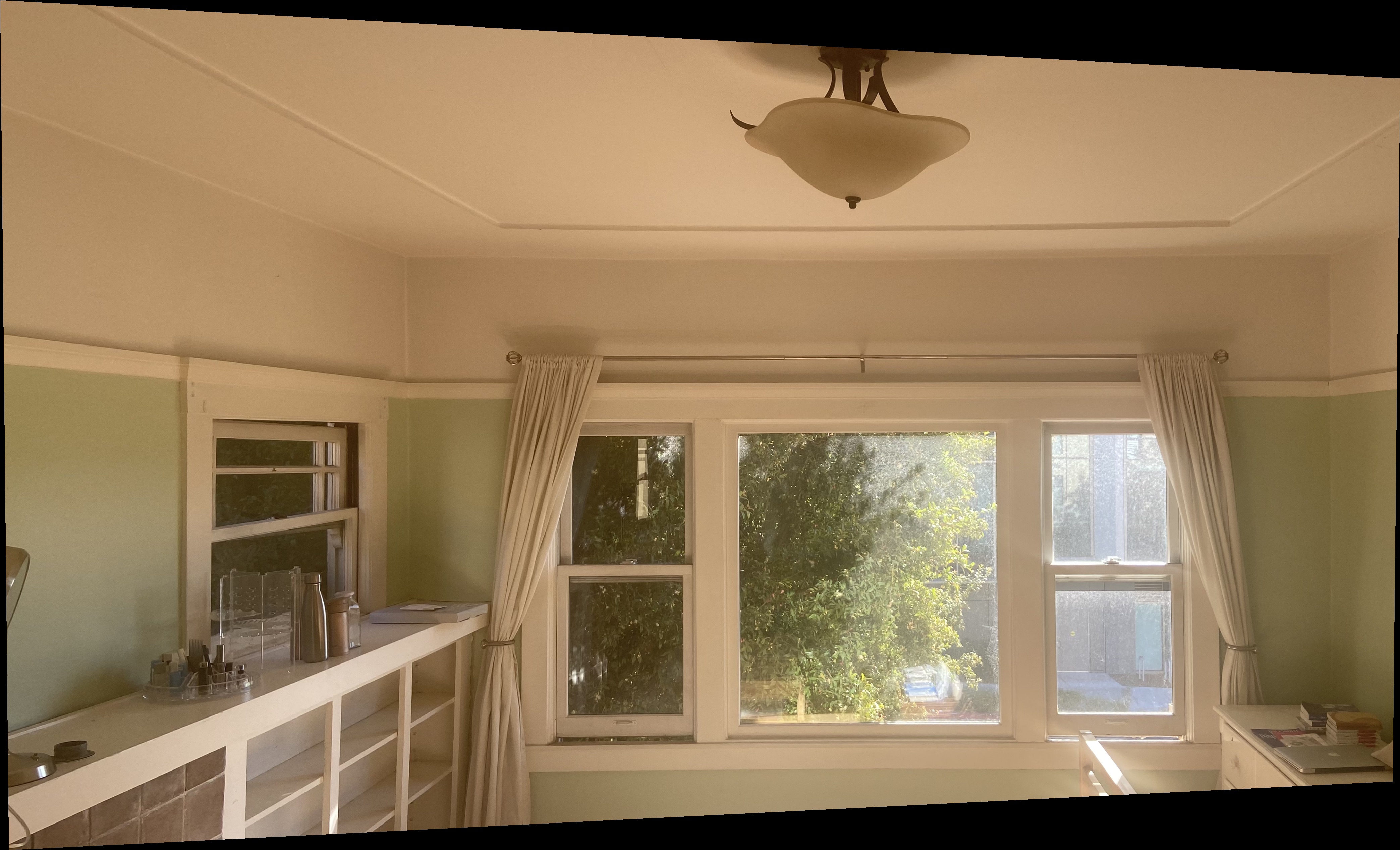 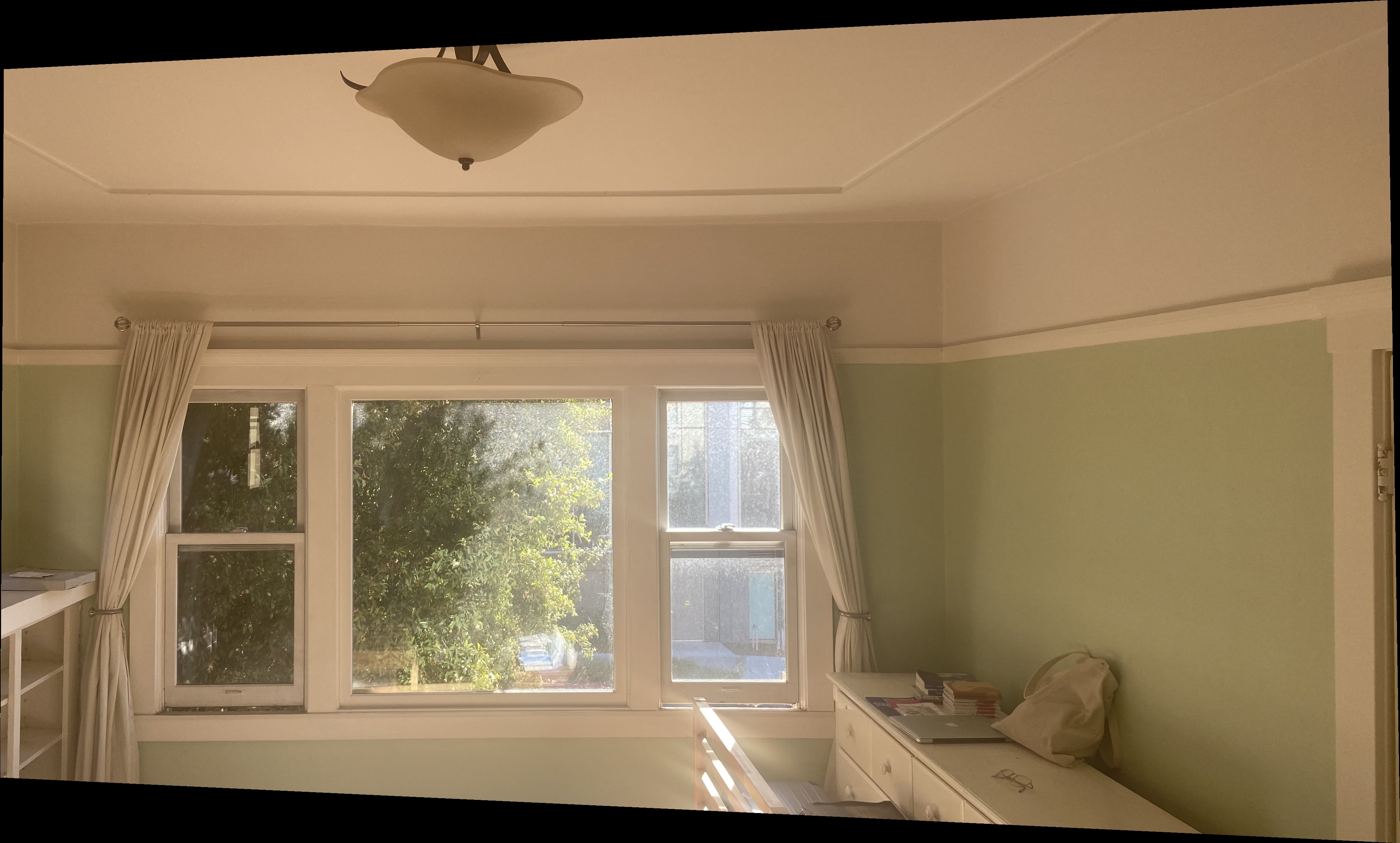 Before blending, I first padded the rectified images such that 1. they all have the same dimensions and 2. corresponding keypoints are at the same position. We also have the exact mask corresponding to our warped images, but since the masks are not mutually exclusive (rather cannot be or there will be no corresponding keypoints), we cannot directly blend in a similar fashion as our previous project of blending the “Oraple”.
Instead, we define a seam between two neighboring images as the pixels that are equidistant to the edges of the images and update our mask according to the seam, such that the masks become mutually exclusive. Then, we can blend according to a two layer laplacian stack, i.e. a “two band blending”. The stitched mosaic:

I was awed by the mosaic at first, but then small hiccups cought my eyes and I could not get the right set of keypoints to eliminate the hiccups. I hope part B can take care of that for me so I don’t need to deal with my butterfingers 😣. The “aha moment” when I figured out how to rewrite the projective transformation was very satisfying though 😊.

There are six steps to the matching algorithm

The predicted keypoints and matches: 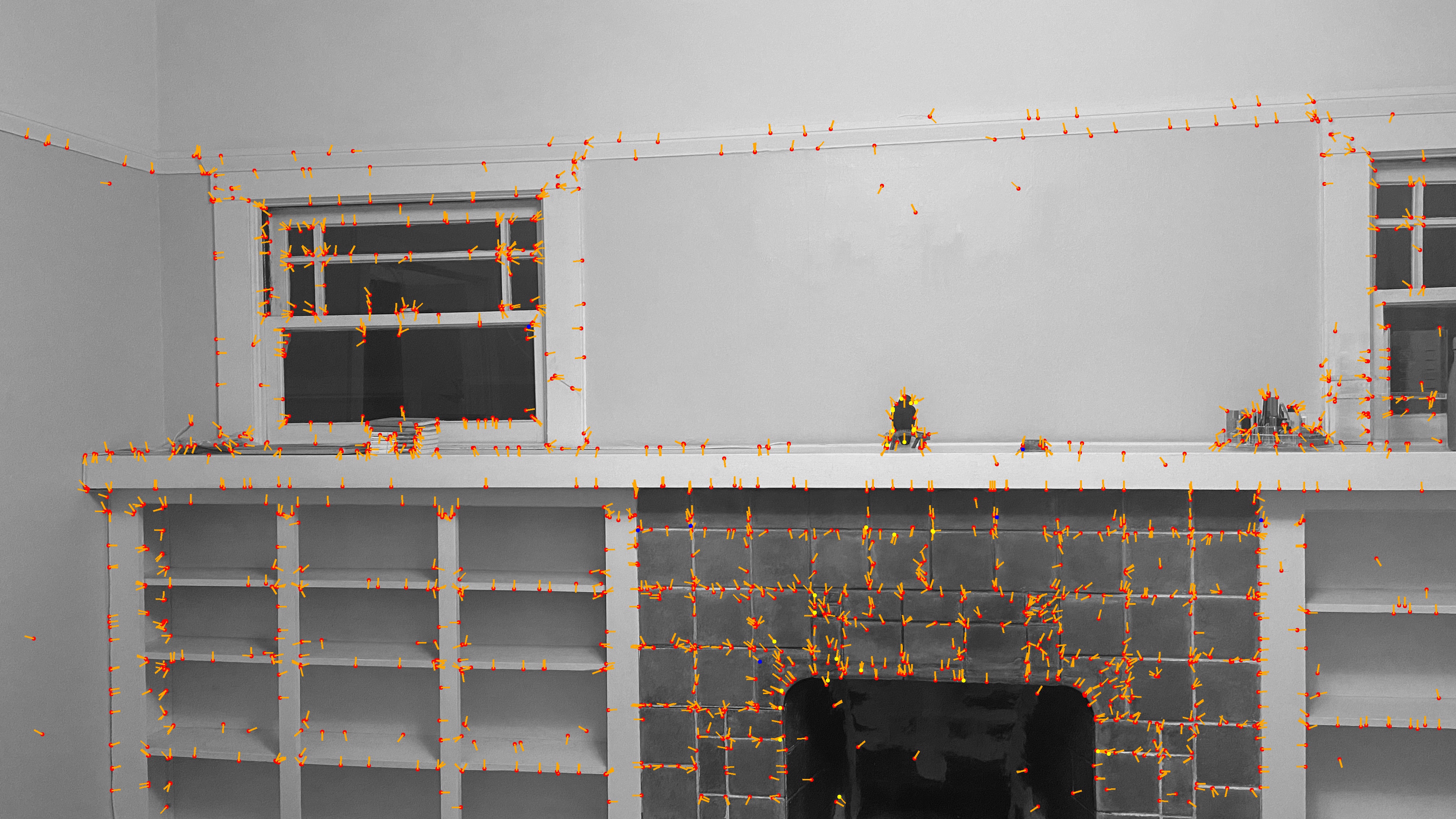 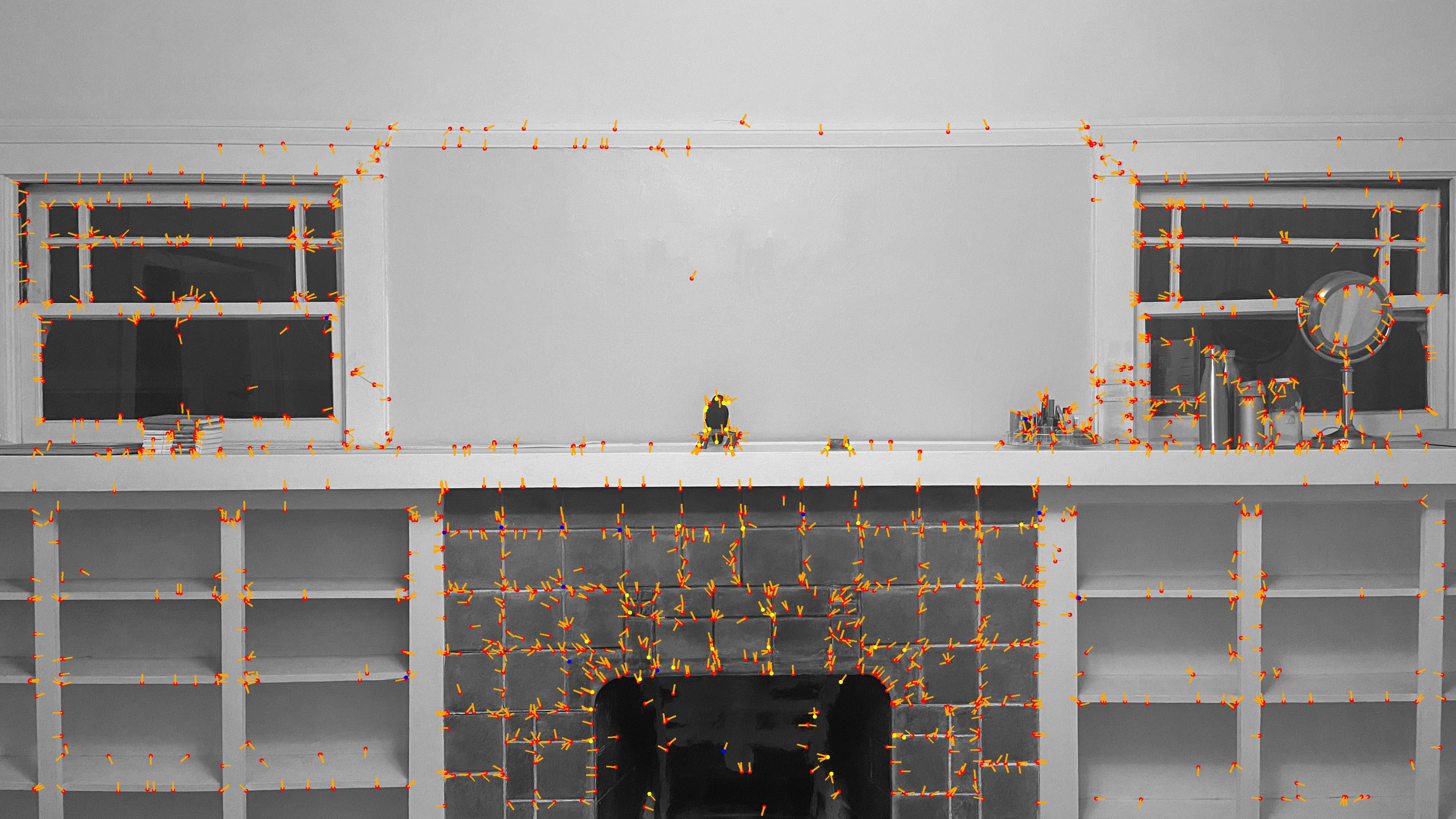 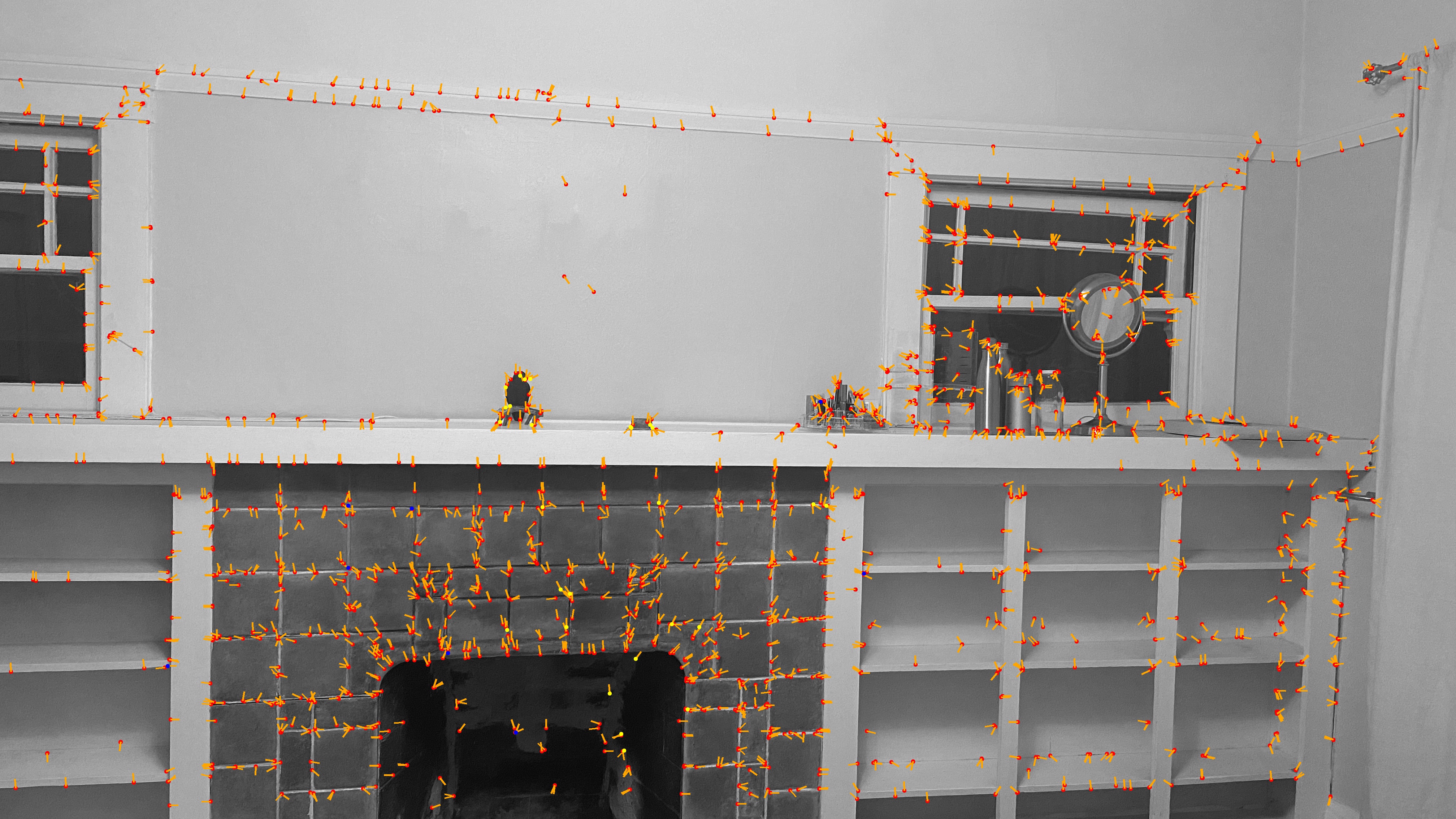 Then, stitching is the same as Part A with the homography computed via least squares on the yellow keypoints. The result is the following:

Why did I choose a different set of images? Because unfortunately the automatically detected keypoints did not result in as good of a mosaic as hand-labeled keypoints 😢

Understanding ANMS as described in the paper was a HUGE pain. I think I understood what Prof. Efros meant by “sometimes research papers are simply not written to be easily read”. However, the results are very cool, especially since this bypasses all the painful and careful labeling process! This also introduced me to the various keypoint matching algorithms such as SIFT, SURF, and ORB, and all kinds of tricks to improve the speed and accuracy!