This is an online worksheet that you can work on during discussions. Your work is not graded and you do not need to submit anything. The last section of most worksheets is Exam Prep, which will typically only be taught by your TA if you are in an Exam Prep section. You are of course more than welcome to work on Exam Prep problems on your own.

When we talk about the efficiency of a function, we are often interested in the following: as the size of the input grows, how does the runtime of the function change? And what do we mean by runtime?

Example 1: square(1) requires one primitive operation: multiplication. square(100) also requires one. No matter what input n we pass into square, it always takes a constant number of operations (1). In other words, this function has a runtime complexity of Θ(1).

As an illustration, check out the table below:

Example 2: factorial(1) requires one multiplication, but factorial(100) requires 100 multiplications. As we increase the input size of n, the runtime (number of operations) increases linearly proportional to the input. In other words, this function has a runtime complexity of Θ(n).

As an illustration, check out the table below:

Here are some general guidelines for finding the order of growth for the runtime of a function:

What is the efficiency of rey?

What is the efficiency of mod_7?

This section is far longer than a typical discussion, and it is recommended that you also use it as a problem bank for your midterm studies! Best of luck, you got this!!

Fill in the lines below so that the execution of the program would lead to the environment diagram below. You may not use any numbers in any blanks.

Click here for the diagram that goes along with this problem, go to page 2 of the pdf

The following environment diagram was generated by a program: 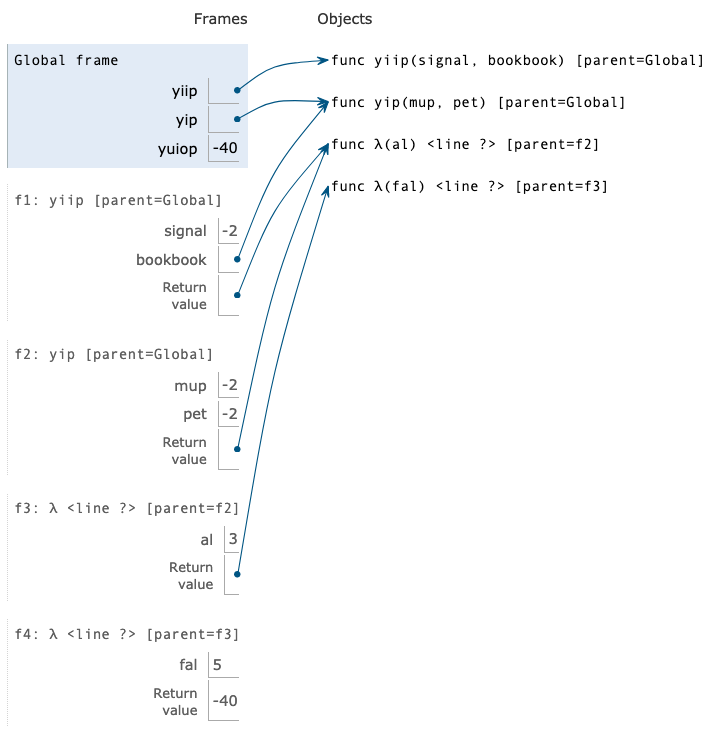 Click here to open the diagram in a new window

In this series of questions, you'll fill in the blanks of the program that follows so that its execution matches the environment diagram. You may want to fill in the blanks in a different order; feel free to answer the questions in whatever order works for you.

Which of these could fill in blank (a)?

Which of these could fill in blank (b)? Select all that apply.

Which of these could fill in blank (c)? Select all that apply.

Which of these could fill in blank (d)?

Which of these could fill in blank (e)?

Which of these could fill in blank (f)?

Fill in the definition of f below such that the interpreter prints as expected. Your solution must be on one line.

Then, given your definition of f, what will be printed below? (Assuming the above lines have also been executed in the interpreter.)

Write the function deep_map_mut that takes a Python list and mutates all of the elements (including elements of sublists) to be the result of calling the function given, fn, on each element. Note that the function does not return the mutated list!

HOF and Self Reference

Write a function that takes in a list s, a function f, and an initial value start. This function will fold s starting at the beginning. If s is [1, 2, 3, 4, 5] then the function f is applied as follows:

You may assume that the function f takes in two parameters.

Consider the below function pig_latin, which computes the pig latin equivalent of an English word

This code repeatedly moves a letter from the beginning of a word to the end, until the first letter is a vowel, at which point it adds on 'ay' to the end. However, this code fails when the original word has no vowels in the set {a, e, i, o, u}, such as the word "sphynx." Write a new version of the pig_latin function that just adds 'ay' to the original word if it does not contain a vowel in this set. Use only the first, rest, and starts_with_a_vowel functions to access the contents of a word, and use the built-in len function to determine its length. Do not use any loops.

Write a function that takes a positive integer n and returns the number of ten-pairs it contains. A ten-pair is a pair of digits within n that sums to 10. Do not use any assignment statements.

Hint: Use a helper function to calculate how many times a digit appears in n.

Given a list of numbers s and a target difference d, write a function num_splits that calculates how many different ways are there to split s into two subsets, such that the sum of the first is within d of the sum of the second. The number of elements in each subset can differ.

You may assume that the elements in s are distinct and that d is always non-negative.

Hint: If the number you return is too large, you may be double-counting somewhere. If the result you return is off by some constant factor, it will likely be easiest to simply divide/subtract away that factor.

Define a function prune_leaves that given a tree t and a tuple of values vals, produces a version of t with all its leaves that are in vals removed. Do not attempt to try to remove non-leaf nodes and do not remove leaves that do not match any of the items in vals. Return None if pruning the tree results in there being no nodes left in the tree.

We can represent the hailstone sequence as a tree in the figure below, showing the route different numbers take to reach 1. Remember that a hailstone sequence starts with a number n, continuing to n/2 if n is even or 3n+1 if n is odd, ending with 1. Write a function hailstone_tree(n, h) which generates a tree of height h, containing hailstone numbers that will reach n.

Hint: A node of a hailstone tree will always have at least one, and at most two branches (which are also hailstone trees). Under what conditions do you add the second branch?