In this project, you will write your own simple version of numpy (a Python library for performing mathematical and logical operations on arrays and matrices, whose underlying code is written in C) and optimize your code for performance.

If you disconnect and re-connect to the hive, you will need to run source .venv/bin/activate again to activate the virtual environment.

Matrices are stored in a matrix struct (already defined for you in src/matrix.h).

The int rows and int cols fields store the number of rows and columns in the matrix. 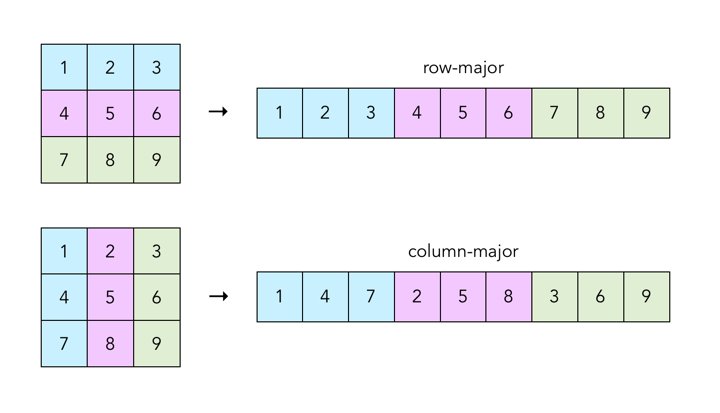 Note that it's not too important to understand slices, parents, and reference counts conceptually for this project. As long as you implement the allocation and deallocation functions (Tasks 1.2-1.4) according to the provided hints, you shouldn't need to work with slices for the rest of the project.

Fill in the get function in src/matrix.c. This function gets an element from the matrix data at the specified row and column (zero-indexed).

Fill in the set function in src/matrix.c. This function puts the given value in the matrix data at the specified row and column.

For both functions, you can assume that row and col are valid indices.

You will need to finish the functions up to Task 1.3 before testing/debugging these functions.

Fill in the allocate_matrix function in src/matrix.c. This function allocates space for a new matrix struct with the provided number of rows and columns.

You will need to finish the functions up to Task 1.3 before testing/debugging these functions.

Fill in the deallocate_matrix function in src/matrix.c. This function frees a matrix struct and, if no other structs are pointing at the data, frees the data as well.

Fill in the allocate_matrix_ref function in src/matrix.c. This function allocates space for a matrix struct created by slicing an existing matrix struct.

Optionally, you can also fill in sub_matrix and neg_matrix (not worth any points, just for fun). If you choose not to implement the optional functions, please don't delete them, comment them out, or change the function signatures - just add return 0; in the functions to avoid compiler warnings.

Fill in the pow_matrix function in src/matrix.c. This function should multiply the mat matrix by itself repeatedly pow times. We recommend calling mul_matrix within this function. Remember to account for the cases where pow=0 (put the identity matrix in the result matrix) and pow=1 (put the values of the original matrix into the result matrix).

To run the provided CUnit tests, run in the root folder of your project:

This will create an executable called test in the root folder and run it.

By default, CUnit will run these tests in Normal mode. When debugging a specific issue, it may be helpful to switch to Verbose mode, which can be done by commenting and uncommenting the relevant lines in mat_test.c:

Make sure that one line is uncommented at a time.

Finally, you are welcomed to modify the tests/mat_test.c file in the tests directory to implement your custom test cases. To add your own custom tests, you will need to define your own test function and possibly use any of the CU_ASSERT_EQUAL, CU_ASSERT_NOT_EQUAL, or CU_ASSERT_PTR_EQUAL CUnit assertions to compare any value that you would like (Suggestion: CUnit has a guide with more assertions. Lastly, you will need to call CU_add_test to the main function to run your newly created function! A good place to start is to look at some of the provided tests and use the general approach to your own specific tests.

The SIMD instructions in this project work on 256 bits = 4 doubles at a time, so you can use them to perform four operations in parallel.

Here is a list of instructions that you may find helpful, although you are also allowed to use other instructions not on the list.

As a reminder, you can use the Intel Intrinsics Guide as a reference to look up the relevant instructions. You will have to use the __m256d type to hold 4 doubles in a YMM register, and then use the _mm256_* intrinsics to operate on them.

Note that you will need to make sure that none of the different threads overwrites each others' data. Just adding a #pragma omp parallel for may cause errors. Here are a few useful links to use as a starting point: Using OpenMP with C and OpenMP Functions.

After implementing algorithmic optimization (in addition to SIMD and OpenMP on mul_matrix), our reference implementation achieves a speedup of approximately 745.5 on pow_matrix. Note that your speedup might be different depending on your implementation, so don't worry if your speedup doesn't match exactly.

If your code is still not passing the performance tests at this point, you can consider some other techniques for speeding up your code.

As mentioned in Tips and Guidelines and Getting Started, we have installed the naive solution which we will be comparing against on hive! The python package is called dumbpy and you can import it like any other python library (so long as you are on hive)! Please note we will not be distributing this binary which means you must work on hive if you want to test with it. You should use this and the time package to determine how much you sped up your code.

To debug your Python tests:

Write a brief description of what you did in this project in README.md. You can also leave any feedback about the project here so we can improve it for future semesters! Minimum 500 characters, please.

Submit your repository to the Project 4 assignment on Gradescope.

Here are the graphs for the speedup tests. The x-axis is your speedup times and the y-axis indicates what percentage of that test's total score you will receive.

Minimum speedup for 100% on each test: