Warning: We strongly recommend working on the hive machines for this lab. OpenMP may perform differently on your local machine, and installing it can be annoying.

In your labs directory, pull the files for this lab with:

OpenMP stands for Open specification for Multi-Processing. It is a framework that offers a C interface. It is not a built-in part of the C language -- most OpenMP features are compiler directives. (One example of a compiler directive you've seen in the past is #include.)

In this lab, we'll practice some basic usage of OpenMP. OpenMP is already installed on hive machines, so we strongly recommend that you work on the hive machines for this lab.

Consider the sample hello world program (hello.c), which prints "hello world from thread #" from each thread:

This program will create a team of parallel threads. Each thread prints out a hello world message, along with its own thread number.

IMPORTANT When writing your own code, ensure that you place the opening curly brace on a new line. Do not put it on the same line as the directive.

You can change the number of OpenMP threads by setting the environment variable OMP_NUM_THREADS or by using the omp_set_num_threads function before the parallel section in your program.

If you run ./hello a couple of times, you may notice that the printed numbers are not always in increasing order and will most likely vary across runs. This is because we didn't specify any sort of synchronization options, so OpenMP will not enforce any execution order. (More on that later.) It is also vital to note that the variable thread_id is defined inside the parallel block, so it is local to each thread and not shared across all threads. In general with OpenMP, variables declared inside the parallel block will be private to each thread, but variables declared outside a parallel block will be shared across all threads. Again, there are ways to override this, but more on that later.

Vector addition is a naturally parallel computation, since it's an elementwise operation (element i of the result vector does not depend on elements j != i), so it makes for a good first exercise. The v_add() functions inside omp_apps.c will store the sum of input vectors x and y into the result vector z. A first attempt at this might look like:

The testing framework will time the function execution for different thread counts. You should observe that this implementation performs worse as we increase the number of threads! Why?

The issue is that each thread is executing all of the code within the omp parallel block. If we have 8 threads, we'll actually be performing the same vector addition 8 times! Not only that, but various threads writing to the same variables in memory may cause a decrease in performance due to cache synchronization. Rather than have each thread run every iteration of the for loop, we need to split the for loop iterations across all the threads so each thread does only a portion of the work.

The good news is that OpenMP has built-in functionality for dividing up the work of for loops among threads. The bad news is that for this exercise, we'd like you to first try splitting the for loop iterations among threads manually. Let's try to understand a couple methods we could use to divide the work, and the benefits/drawbacks of each way. You cannot use the OpenMP for directive for this exercise, but this is how you'd use that directive:

The two differences between this example and the previous one are: 1), the for at the end of the directive, and 2), the lack of opening and closing brackets around the parallel section. The #pragma omp parallel for directive needs only to be placed directly before a for loop; brackets are not required. Again, remember that for this exercise, you cannot use this directive.

Your task is to optimize v_add(). Remember that speedup may increase slower after a certain number of threads, since part of the whole program is not parallelizable. Your implementations should use the following 2 functions -- don't hardcode thread counts or thread IDs:

The functions you'll be implementing are in omp_apps.c.

Then, implement v_add_optimized_chunks() which separates the vectors into contiguous chunks. As an example, if we have 3 threads, thread 0 will handle the first third of the elements in the array, thread 1 will handle the third quarter, and thread 3 will handle the last third. Remember to handle the "tail case" -- depending on your chunking logic, the last chunk may have slightly more or less elements than the others. 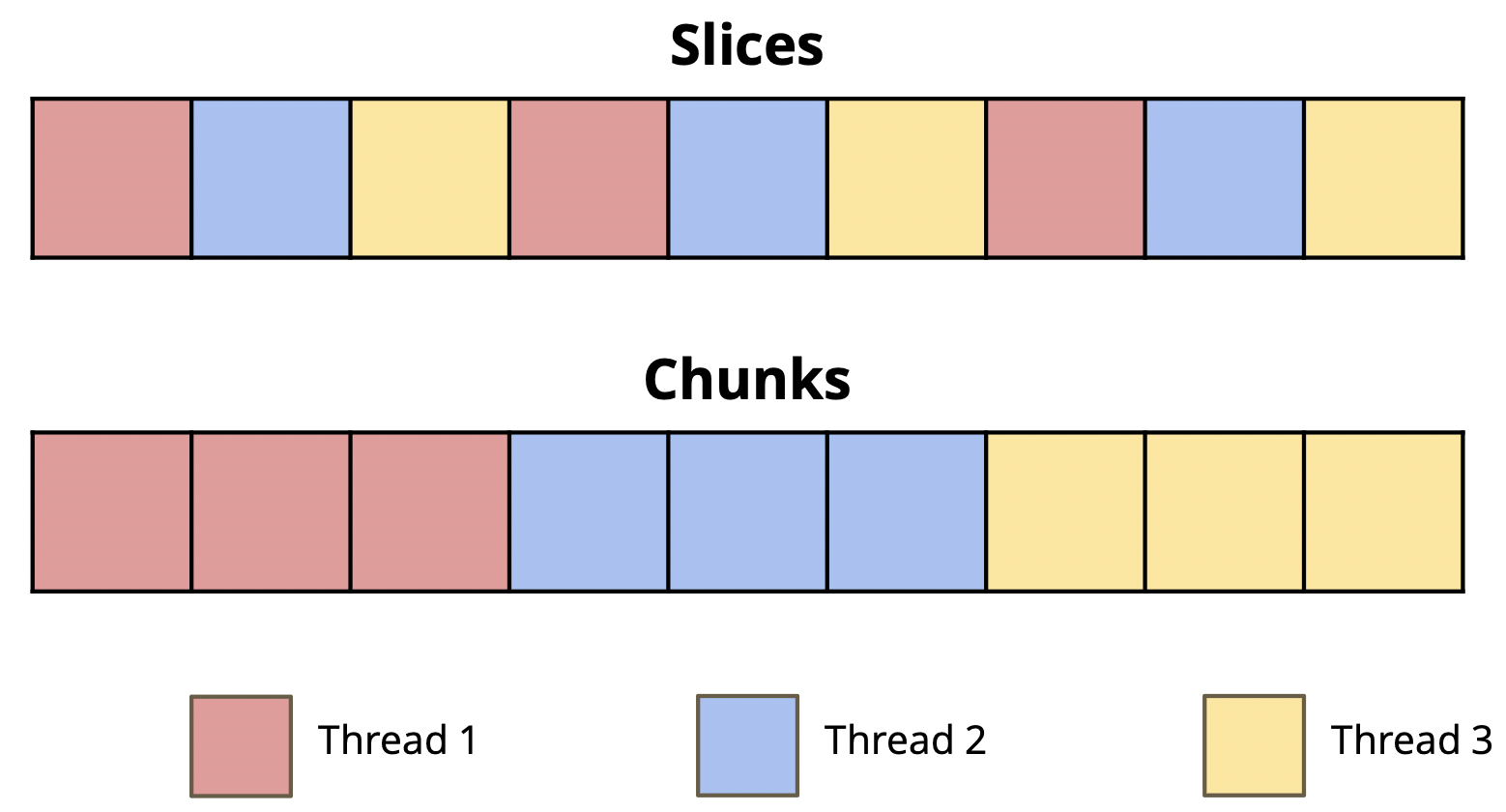 The next task is to compute the dot product of two vectors. At first glance, implementing this might seem not too different from v_add, since we should now just perform elementwise multiplication instead of addition. The challenge is how to add the products into one variable (reduction) to get our final answer. If multiple threads try to add their results to the same variable at the same time, it will lead to a data race which will result in an incorrect result.

The methods you'll be implementing are in omp_apps.c.

First, let's fix this performance problem without using the reduction keyword. Write your implementation in dotp_manual_optimized(). Remember that we want to reduce the number of times each thread enters the critical section.

Next, let's fix this problem using OpenMP's built-in reduction keyword. Write your implementation in dotp_reduction_optimized(). Note that your code should no longer contain #pragma omp critical.

We are working to improve the labs for next semester, so please fill out this survey to tell us about your experience with Lab 9. The survey will be collecting your email to verify that you have submitted it, but your responses will be anonymized before the data is analyzed. Thank you!

Save, commit, and push your work, then submit to the Lab 9 assignment on Gradescope.