Before you start, you must install the rtl-sdr drivers and the python support. Follow the instructions on the class website:

The rtl-sdr usb dongles enables you to obtain samples from the electromagnetic spectrum around you. In very general terms, the dongle contains several components:

To learn about what you can do with SDR's, I recommend you watch this youtube video. Most (not all) the stuff shown there can be done using rtl-sdr. At minute 5:00 you will see an example of ADS-B, which you will partly implement in this lab.

Task I: Capture data and compute the spectrum

Let's look at a simple example of acquring data and looking at its spectrum. NOAA weather radio is transmitted from San Francisco at 162.4MHz It is a 5KHz frequency modeulated audio signal that voices a recording of the weather. If you live in the east-bay, you might also be able to pick up the Mt. Diablo transmitter at 162.425MHz. Here's a map of the SF coverage: 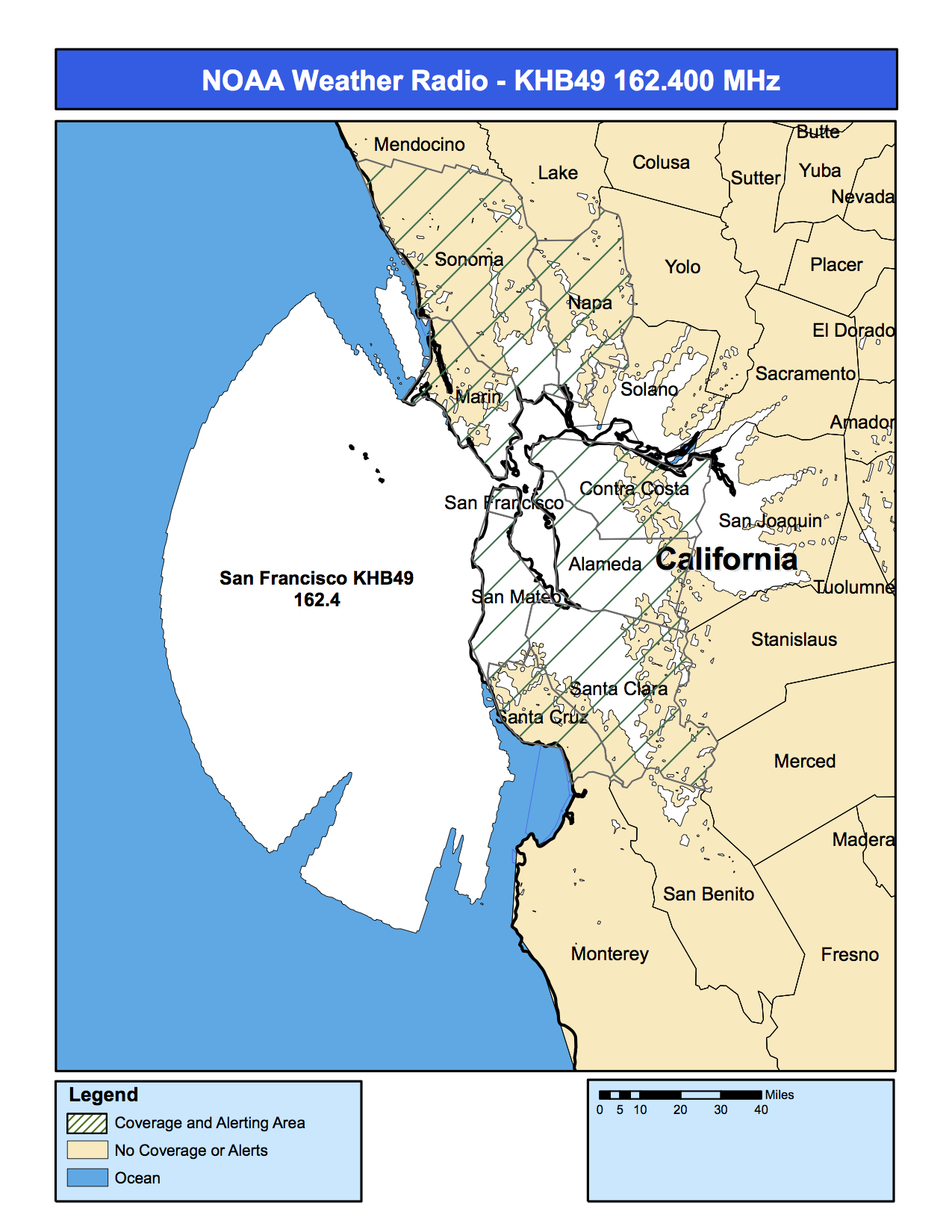 It's best if you are outside of the building when collecting samples. Let's collect 4 seconds worth of samples ,sampled with a center frequency of 162MHz and a sampling rate of 1MHz.

Instantiate the sdr with the following parameters:

The python interface to the SDR required that the number of samples be a multiple of 256. To read samples from the SDR, run the following command:

If you are done with the device, you can clear it by: sdr.close()

We will only use a small portion of it to process and look at the spectrum.

You should be able to see some energy in the spectrum around the right frequency. However, what you will notice immediately is that the spectrum is noisy. In addition there might be some spurious peaks and in the white dongles (E4000) there is also a large peak at the DC frequency. The peak at the DC frequency is due to constant bias in the ADC of the device. This translates to an impulse at \(\omega = 0\). Spourius peaks come from local oscillator leak and also quantization erros.

To reduce the noise and get a finer look at the spectrum, we will break our entire sequence to smaller sequences. We don't need such a good spectral resolution, so we will break it to chunks sized 800 samples, calculate their magnitude spectrum and average. This is also called average power specrum.

This plot is called average power spectrum. As you can see, the spectrum looks much nicer now. Can you identify the NOAA weather station? Only the wide spectrum peaks are real. BTW, The very narrow spiky peaks in the spectrum are probably not real signals. They are due to leakage of the local oscilator, non-linearity in the receiver, and poor dynamic range of the ADC of the device. Still... for 12$ it is not too bad!

Note: The rectangular bands you see around the main signal are HD radio signals. These are transmitted at the band edges and provide digital radio programming. Unfortunately HD radio in the USA uses proprietery protocol, and we can not decode it at this time.

The following text is adapted from (https://github.com/bistromath/gr-air-modes).

Automatic Dependent Surveillance-Broadcast (ADS-B) is a communication protocol using the Extended Squitter capability of the Mode S transport layer. The protocol is:

ADS-B-equipped aircraft broadcast ("squitter") their position, velocity, flight number, and other interesting information to any receiver within range of the aircraft. Position reports are typically generated once per second and flight indentification every five seconds.

Packets are sent at 1090Mhz and use Pulse Position Modulation (PPM) at a rate of 1Mbit per second. The simple modulation scheme is designed to be trancieved by cheap hardware -- which is very much what we are doing in this lab!

Pulse position modulation belongs to the family of amplitude modulated signals and in particular to the type of amplitude-shift-keying (ASK) or on-off-keying (OOK). In OOK, 0, 1 bits are sent by turning the carrier on and off. PPM uses Manchester encoding variant of OOK. The idea in Machester encoding is that in each bit interval there is always a transition between on and off and the transition occurs in the middle of the bit interval. For example, a transition from off to on would represent a 0 and a transition from on to off would represent a 1. Manchester codes have the advantage of being self clocking so the clock can be recovered from the data stream.

A mode S ADS-B packet consists of an \(8\mu\)s preamble followed by a data block of 56 or 112 \(\mu\)s data block. A preamble is a signal used in network communications to synchronize transmission timing between two or more systems. Here's a diagram that illustrates a typical packet:

Now, since the bit-rate is 1Mbit per second, then a sampling rate of 2Msample/sec should be sufficient to capture the bit transitions, detect the preamble and deode packets. In practice, ADS-B packets can be decoded using the rtl-sdr, but the captured data does not look like the ideal packet. Here's an example of a part of a captured packet:

( This packet is rescaled to have a maximum amplitude of 128. Your packet does not neccessarily have this height )

As you can see, there are many distortions: the key-off is not zero and there are variations in the amplitudes of the key-on. These come from various sources including the anti-aliasing filters, interfering signals, noise, gain control and more. However, it is possible to clearly see the preamble and the packet bit content! This is pretty amazing that this can be done using a 12$ usb dongle because ADS-B equipment is very expensive.

There are several types and subtypes of "Squitters":

Only the long squitters have location information in them.

When acquiring data, it is highly recommneded that you be OUTSIDE or close to a BIG window. Electromagnetic radiation at 1090MHz does not penetrate through walls. In addition, the antenna you got with the dongle is not ideal for ADS-B reception. It is also recommended that you do this part during the day and not at night, when the air-traffic in the bay area is low.

Remember that the absolute gain of the signal is not important. It is the relative gain between your signal and noise that affects the detection, so a higher SDR gain does not mean a better signal-to-noise ratio (SNR).

Before we start at automatically detecting packet, let's look at one. We have written a bokeh plot below (run the following two cells) to help you scroll through the signal. *Make sure you run the interact cell to get access to the slider.

We would like to automatically detect packets. Detecting the preamble is a good way to start, as the preamble is the same for all packets. In general, a good detector should have the minimum number of false negatives and false positives. For ADS-B packets, we care more about false negatives, since this means that we may be missing an important packet. At the same time, a false positive would result in a packet which we can not decode, which is not harmful, except that we spend time in extra computation to perform parity checks.

When looking at detection, it is useful to know what is the noise level compared to the signal level. This can help setting thresholds for detecting signals. When noise has Gaussian statistics, we can calculate the sample mean and sample standard deviation to estimate its distribution. Unfortunately, our received signal is not only contaminated by Gaussian random noise. It is also contaminated by interference as well as bursts of ADS-B packet data. If we compute the sample mean and standard deviation, they could be biased by strong outliers coming from the packet bursts.

Here's where the median can come to our rescue. The median is a measure, which is robust to outliers and can be used to estimate the mean. In order to robustly estimate the standard deviation we can use the Median Absolute Deviation (MAD) estimator: http://en.wikipedia.org/wiki/Median_absolute_deviation. The MAD is computed in the following way:

As it turns out, the standard deviation can be approximated from the MAD by:

Optimal thresholds based on noise are beyond the scope of this lab. However, we need to come up with a threshold for which we can say that a received signal (ANY signal, not just ADS-B) is above it. A safe bet would be the mean plus some multiples of the standard deviation. A factor of 3 to 5 is reasonable.

Once you estimated the threshold, you can reuse it for subsequenct captures, and do not need to recalculate it. You can refresh the estimates periodically as things may change over time.

Detecting that a signal is received does not mean that it is the right signal! We would like to make sure it is the preamble. There are many ways we can go about detecting the preamble. We already saw in Lab 1 that matched filtering can be used for detection. Take a look at the ideal preamble below, and a preamble we (Frank and I) measured when preparing the lab.

Unfortunately, our received preambles have varying total amplitudes (planes are near and far), have bias, and also exhibit amplitude modulation. At the same time, the preamble is relatively short. Instead of matched filtering, we can devise a non-linear descriptor which may be more robust. Here, we will look at detecting the preamble using logic.

Considering again the ideal preamble. Notice, that there are four values which are high [0, 2, 7, 9]and there are 12 values which are low [1,3,4,5,6,8,10,11,12,13,14,15]. If we just consider logic, e.g., comparing high's and low's , we can make our detection significantly more robust to the bias and amplitude modulation. Another benefit of using logic is that it can be computationally more efficient than normalized matched filtering. Because of this, it is more suitable for real-time applications.

Of course, it is possible to introduce more conditions. For example, in order to avoid detection of noise signal that resembles the logic, we can set a minimum limit on the amplitude of high's we consider a detection. In addition, to be able to separate between high's and low's we need to have a good amplitude margin -- so we can set a threshold for a minimum average margin between them.

Once packets are detected, it is very easy to extract the bits of the packets. Recall that each bit is encoded in 2 samples and that the transition defines the bit value. Therefore if sample 1 is greater than sample 2 then the bit value will be 1. Otherwise it will be zero.

The only task left is to decode the messages. The details of how to decode the messages are beyond the scope fo the course, but the basic idea is that the decoder corrects for some errors using checksums from the packet, uses the first few bits to identify the packet types and extract information about position, angle, velocity and flight number. We have provided you functions to decode ADS-B messages in the next part of the lab. You will need to copy your detectPreamble() and data2bit functions.