EECS 16A: Designing Information Devices and Systems I, Spring 2015¶

Circuit boards can be mass-produced in the form of PCBs. A PCB contains of conducting and non-conducting layers sandwiched together to connect each component to others, along with holes to fix the components to. In the diagram above, as with the PCB we will be working with today, there are only two conducting layers; more complicated PCBs may contain many more. The traces in the PCB we will actually be working on today is shown below. 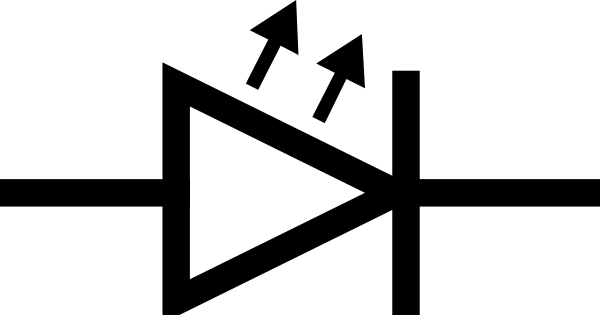 LEDs are elements that emit light when the voltage drop between its two terminals is above a certain value. Above this threshold, the LED acts as a resistor, but its resistance depends on the current forced through it. Its brightness also depends on the current flowing through the terminals. One thing to note is that the LED is a polarized device, so its two terminals are not identical. The triangular side of the LED symbol and the longer leg of the component is the positive (Anode) terminal of the device, while the flat side of the symbol and the shorter leg of the component corresponds to the negative (Cathode) terminal. In the PCB, the polarity is written as A and C respectively. 1. Connect a probe to either the green or yellow outputs labeled "1" and "2". The function generator probes have thick wires with two smaller red and black wires exposed at one end. These correspond to positive and negative terminals respectively just like on the oscilloscope probes (e.g. for a 1V amplitude square wave the voltage difference between the red and black wires will alternate between +/- 1V).

2. Press the "Waveforms" button and select the time of waveform you'd like to output.
Just like with the oscilloscope, buttons to the right of the screen bring up menus and the buttons at the bottom of the screen allow you to select options from those menus.

3. Push the "Parameters" button and set the desired parameters for your output.
Both the number pad and the knob can be used to enter these values.

4. Press "1" or "2" corresponding to the output you have your probe connected to and then select "Output On".
The output of the function generator is off by default. When you press the button to turn it on, the corresponding "1" or "2" button shoud light up.

The PCB you are given corresponds to the circuit above. Let’s analyze the circuit. Discuss the answers with a GSI. While waiting for your turn, please read on and continue to the next task. Assuming the voltage drop across X1 is 0.7V or higher, what is the relationship between the current through X1 ($I_{X1}$) and the resistance of R1. What happens to the LED when R1 is increased?

Can we completely turn off the LED when the power source is on? If so, how? Otherwise, why not?

Now that we understand the circuit, we can start building it.

In order to build our circuit we first need to learn an important skill, soldering. Soldering is a process in which two or metal elements are joined together by melting and flowing solder into a joint, see more at http://en.wikipedia.org/wiki/Soldering. It is akin to welding, but on a much smaller scale. Soldering is useful because it enables us to establish an electrical connection between two circuit elements, which gives us the ability to build a complete circuit.

Important names and labels: The Soldering Iron is the pencil shaped tool that is used to apply heat. Solder is the metal filament that gets melted by the soldering iron and fills the gap between two circuit components.

Soldering steps (repeat these steps for each joint): Before you start soldering, here are some important notes:

When you are done soldering, show your GSI that your circuit can be used to fade the LED.

Congratulations on your first PCB circuit! We will refine our soldering skills again next week to create our resistor mesh for the resistive touchscreen.

By now you should be frustrated that you have to fade the LED manually... Well, we have machines that can replace your job. Use the Function Generator to create a triangle wave between 0 and 5 Volts with a period of 3 seconds. You can check whether your Function Generator behaves correctly using the Oscilloscope. Then, connect the function generator to your circuit. When you are done, feel free to play around with other signal modes.

The Function Generator works nicely as it fades the LED all the way to off, but it is pretty big and too complicated for the task. The Arduino, on the other hand, can handle fading easily. Connect the Arduino to the PC, then open the Fading example from File > Examples > 03.Analog > Fading and load it to the board. Then connect pin 9 to the VDD of the circuit and GND to the GND of the circuit.

Show your GSI the fading LED controlled by the Arduino.

Note: The Arduino actually does not output analog signals - it can only output digital signals (0V and 5V). The fading effect is achieved by something called Pulse Width Modulation. For those of you who are interested in understanding how the Arduino deals with this, this tutorial explains the mechanism.